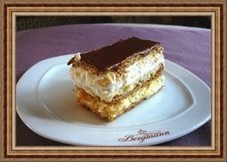 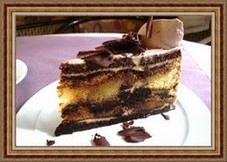 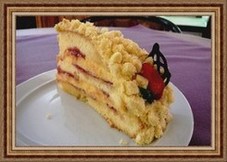 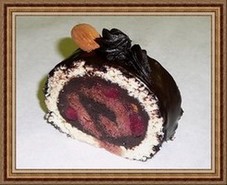 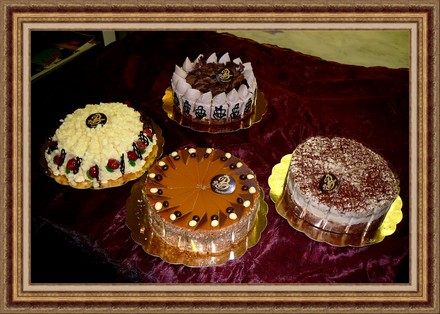 Vanilla slice / Napoleon / Mille-feuille [„Francia krémes”]: crisp, buttery layers of puff pastry with cooked vanille cream, stuffed with whipped cream, and caramel fondant on top. Vanille slice has been made of habitual ingredients, using the traditional bergmann family recipe through generations. Vanilla slice is our best known and most popular speciality among our guest. We make different variations of this cake with strawberry in sping, and chestnut in autumn and winter.

Captain Morgan cake: pieces of sponge cake with rum and chocolate dressing, stuffed with vanilla cream. It was named after the famous jamaican pirate This cake was created at our confectioneries, made with the original recipe of Ernő Bergmann.

Mimosa cake: light sponge cake, with vanilla cream and with strawberry dressing between the layers, stewn with pieces of sponge cake. The tiny pieces of sponge cake make it similar to the mimosa flower that was named after it. This cake is traditionally made in nothern Italy during the Spring Holidays’ Feast but our costumers can taste it in Balatonfüred too.

Gellért Roulade: light sponge roll with thick, cooked parisian chocolate cream, rum, cherry, and pieces of brittle. We make it after the original recipe which was also a popular pastry at the confectionery of the Gellért Hotel in Budapest. The Gellért Hotel was built in 1918 and its pastry shop was a meeting point of the inhabitants of Budapest.